Fatigued Drivers Put Everyone on the Road at Risk

You probably think of drinking or drug abuse when hearing the phrase “impaired driving.” The fact of the matter is that drowsy driving is often just as dangerous as getting behind the wheel while under the influence of alcohol. While a breathalyzer administered by police at the scene can easily detect drunk driving, it can more difficult to prove the at-fault party was driving while drowsy, which is why you need an attorney if you suffered an injury in a tired driving accident.

Dangers of Drowsy Driving in Louisiana 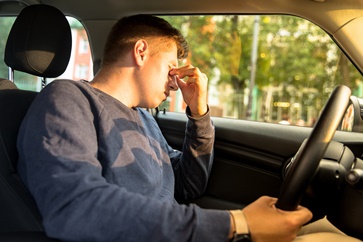 Many newer vehicles come with technology meant to curb accidents caused by drowsy driving, like audible warnings when leaving the lane or closing your eyes, but they aren’t foolproof and accidents still happen. Despite those advances, fatigued driving still results in tens of thousands of collisions and injuries every year across the nation, and Louisiana is no exception.

Lack of sleep impacts drivers through heavy school or work schedules, working night shifts, fatigue from health conditions like a sleep disorder, or drowsiness caused as a side effect of medication. While anyone is susceptible to tired driving, truckers who have to travel extremely long distances for their employment are at particular risk.

The possibility of directly falling asleep on the road while heading home after a long shift isn’t the only risk of this negligent behavior. Drowsy driving specifically causes problems like:

Pursuing Legal Action Against a Tired Driver After a Crash

Anyone who puts the keys in the ignition and hits the road has both an ethical and a legal duty to be alert, follow traffic signs, and keep other people safe. When that duty is breached, innocent bystanders and other drivers are bound to get hurt.

Because drowsy driving is a negligent behavior with similar effects overall to driving while drunk, the at-fault party can be held liable for your damages. However, you first need to prove they were driving while fatigued and show that reckless decision led to your injury.

There may be warning signs at the scene of the accident, such as if the other driver is yawning, irritable, blinking constantly, or experiencing frequent head drooping. You’ll need an attorney to thoroughly investigate the cause of the crash and gather additional specific evidence of drowsy driving like:

After gathering the relevant evidence, your lawyer’s job is to protect your legal right to compensation by filing a lawsuit against the person who caused the crash. That potential compensation can cover costs for property damage, medical bills, pain and suffering, lost wages, and even estimated future expenses. Talk to an attorney to discuss the specifics of your injury and how to proceed.

If you suspect the at-fault party who caused your injury was too tired to drive properly, you need to speak to an attorney as soon as possible. Don’t wait to let the professionals begin an investigation and file a personal injury lawsuit within the statute of limitations. Get in touch with the Scott Vicknair law firm today to schedule a consultation and discuss your accident.