Everyone has felt frustration when traffic doesn’t move fast enough, but unfortunately some drivers choose not to let that frustration go and instead engage in aggressive driving. In these situations, punishing other drivers for perceived slights or reaching their destination as quickly as possible becomes more important than the safety of everyone else sharing the road.

While defensive driving saves lives, aggressive driving is often the cause of life-shattering injuries and even wrongful deaths. An aggressive motorist starts to see other drivers as adversaries and uses a vehicle recklessly without considering how people could be harmed.

Aggressive driving is typically aimed at harassing surrounding drivers, or simply ignoring their safety, with actions like:

It’s not hard to see how a collision can easily occur when a driver doesn’t leave enough room between vehicles to stop. Aggressive drivers are also at serious risk of striking another vehicle or a pedestrian in their blind spot while weaving through traffic. Speeding reduces the time to react to changing conditions on the road, and can easily lead to overcorrecting while avoiding an obstacle. Overcorrecting may then cause head-on collisions in the wrong lane or even 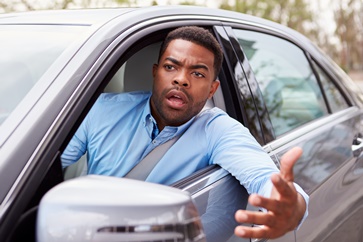 see a vehicle flip over entirely.

These behaviors are all particularly dangerous on highways or in more packed urban parts of the state where multiple vehicles can be impacted by a collision at the same time. Head-on crashes when weaving between lanes or a T-bone at an intersection is likely to injure more people in areas of heavy traffic congestion.

If you’ve been hurt in any of these kinds of accidents, it’s important to understand the legal difference between aggressive driving and actual road rage. While aggressive driving is annoying and sometimes even actively dangerous, it is classified as a simple traffic violation.

Road rage, on the other hand, occurs when aggressive driving is taken to the next level and the vehicle becomes a weapon used to purposefully assault other drivers. This upgraded level of reckless and negligent driving behavior is an explicitly criminal offense that can result in serious charges well beyond the typical speeding ticket.

Injured by an Aggressive Driver? You Need a Lawyer!

Aggressive and reckless driving can make the other driver liable for your damages if you are hurt in a collision, even if criminal charges aren’t filed. In road rage situations, the at-fault driver may be charged with an actual criminal offense and can face serious legal repercussions.

Unfortunately, that criminal trial is unlikely to help your financial situation while recovering from the injuries caused by the accident. That’s why you still need to work alongside an experienced Louisiana car crash attorney to gather evidence and file a personal injury lawsuit against the aggressive driver.

A skilled legal professional can help by gathering all the necessary evidence to present to a jury so the aggressive driver is held accountable for their actions and you are able to recover compensation covering your damages.

Those damages may include the costs of your medical bills after the accident, lost wages for time away from work while recovering, and less tangible effects like physical pain, emotional suffering, and loss of qualify of life in cases of permanent disability.

Talk to a Trial-Ready Attorney About Your Car Accident

We’ve seen the devastating toll aggressive driving can take on car crash victims firsthand. That’s why we want to hear about your injury and find out if the Scott Vicknair law firm is the right fit to represent you in court. Message or call us today to schedule a consultation and discuss the specifics of your case.